I've used [versions of] the following graph many times when talking about the cost of textbooks, as part of building a case for OER. 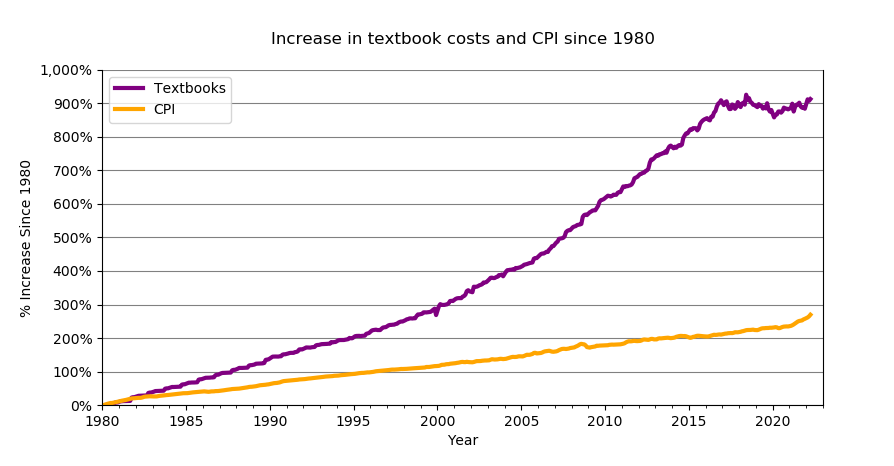 But I actually think this graph is basically backwards [and upside-down, inside-out, and otherwise non-optimal].

There is no denying that it does have a certain visceral impact....
.
.
.
.
.
.
...But I think that graph could be improved, actually to show some measure of the gap between the price of textbooks and what our — inflation-adjusted — intuition says they should cost. The measure should be based on comparing what textbooks cost when a particular person is looking backwards from today to the cost they remember from when they were a student. 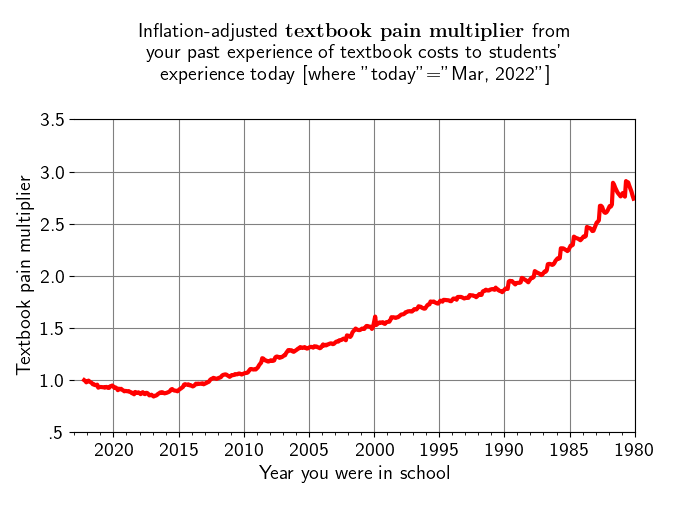 On a recent Friday at around 1pm, I happened to walk into an office on my campus where a student, who was in a class I taught a couple of years ago, is employed as a work-study to answer the phone and greet folks who walk in. He was been bent low over a take-out tray of food, inhaling his lunch, when I appeared.

With wide eyes, in breaths between bites of food, he told me his lunch was just so good... but that was probably because he had been so hungry. I blithely ask him why, thinking he might have been fasting for some reason, or doing some sort of special athletic training (as he sometimes does) — we're very friendly, and it didn't occur to me that it might be an intrusive question.

He told me no, he was so hungry because he hadn't eaten since the previous day's breakfast ... because he couldn't afford to buy anything to eat. He didn't seem embarrassed about it, but merely told me with a very matter-of-fact tone.

I'm not making a legal argument [I repeat]. But I do think that the normative argument above suggests that

It is within the ethical penumbra of the ADA to say that public [and most private] institutions higher education must remove any economic barrier so long as that barrier prevents even a single student from succeeding in their education.

Of course, usually the greatest economic barrier students face is tuition. But I have very little agency or even voice in setting tuition at my institution (or others).

Which is in fact one of the things I like the most about OER: I do have a great deal of agency when it comes to the resources required for the classes I teach. What I take the above analysis to imply, then, is

Faculty must choose zero-cost OER rather than even low-cost closed resources, or else must be ready to provide effective, zero-cost work-arounds which enable every single student, including those with significant economic difficulties, to flourish in their classes.
.
.
.
2200 words